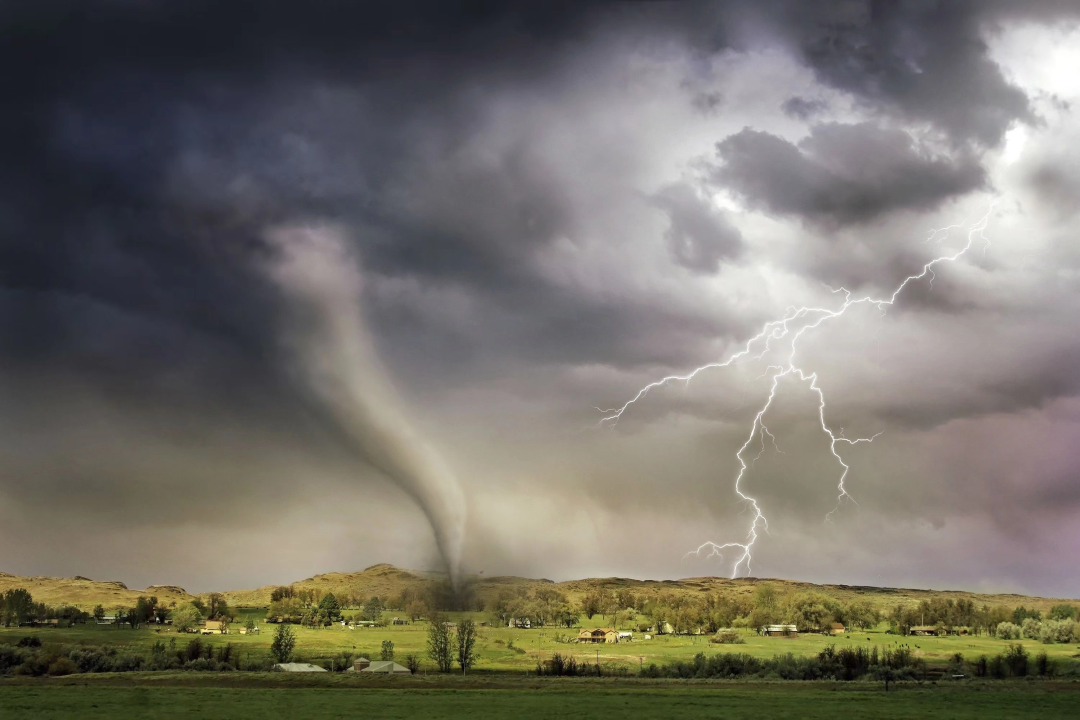 What if someone told you that at any moment there can always be found a point on the earth where there is no wind at this very moment! You may be surprised by this, but it is true. Zooming out might convince you more of this.

As we all know, a typhoon is a large storm on the tropical ocean. It is actually a mass of rotating air with a large area.

However, in the center of such a violent typhoon, within a range of about 10 kilometers in diameter, the air there is almost non-rotating because the surrounding air rotates too strongly to enter it, so there is no wind. .

The following is a real report, which is a vivid description of the situation witnessed by an American meteorologist when he took a typhoon reconnaissance plane and passed through a typhoon eye in the Pacific Ocean. It will undoubtedly deepen your understanding of the strange landscape of the “eye of the typhoon”.

“… Soon, the edge of the rainless eye of the typhoon began to be seen on the radar screen of the aircraft. After the aircraft bumped through the downpour, suddenly we were in the dazzling sun and clear blue sky. A magnificent picture: In the eye of the typhoon is a clear sky, 60 kilometers in diameter, surrounded by a ring of cloud walls. In some places, the cloud wall rises straight up, while in other places, the cloud wall resembles the sky of a large stadium. The stands slope upwards, and the circle above the eye of the typhoon is 10-12 kilometers long, which seems to be dotted against the background of the blue sky…”

Look! In the roaring wind that resembled a galloping horse, there was indeed a fixed point of the wind.

The phenomenon of fixed point can be seen everywhere in nature and life.

Professor Nakatomi Tanaka of Tokyo Institute of Technology in Japan mentioned an interesting thing in his book “Mystery of Science”: the teacher took a group of students to visit a temple, and the teacher put his head into the big hanging clock to observe the movement of the clock. Structure, there was a student who was very naughty and wanted to scare the teacher, so he tried to strike the big bell with a bell striker, but instead of scaring the teacher and the female students next to him, he was frightened by the deafening bell. Jump.

Why would such phenomenon happen?

Professor Tomi Tanaka drew a picture and explained that this is the same as pouring water into a bowl, and then knocking the side of the bowl with chopsticks, we can see the phenomenon that the ripples move from the periphery of the bowl to the center of the bowl. At this time, the ripples in the central part disappear due to mutual cancellation.

A, B, C, D, E in the figure are actually the fixed points of the sound wave. On the contrary, the place F where the students stood to ring the bell was exactly the place where the bell vibrated the most, so the sound was naturally particularly loud.

Below you can make a fun game.

Your audience will be skeptical about this. However, when you show him how to find this fixed point, all their doubts will disappear.

Let the large photo be A′B′C′D′, and the small photo correspondingly be ABCD, extend AB to intersect A′B′ at point P, and make circles through A, P, A′, and B, P, B′ respectively. Then the intersection point O of the two circles is the fixed point sought.

In fact, it is known from the figure above:

This shows that the position of point O in the large and small photos does not change, that is, O is the fixed point of photo position transformation.

look! How miraculous and intriguing is the fixed point phenomenon!

Another example is the flat map that can be seen in places such as large shopping malls, marked with a red “you are here” dot. If the labeling is accurate enough, then this point is a fixed point of the continuous function that projects the actual terrain onto the map.

The Earth spins on its own axis. The rotation axis is constant during the rotation, that is, the fixed point of the rotation motion.

The research on the fixed point system began at the beginning of the 20th century. In 1912, the Dutch mathematician LEJ Brouwer (LEJ Brouwer, 1881—1966) proved that any continuous transformation that turns an n-dimensional sphere into itself has at least one Don’t move.

This is the famous fixed point theorem.

For most readers, some of the mathematical terms in Brouwer’s theorem will no doubt require explanation.

For example, to put it bluntly, it means “continuously transforming” two points whose distance is very small before, but the distance after transformation is still very small. As for “n-dimensional space”, this is an abstract concept.

Take a flat plate and a piece of paper that just covers the bottom of the plate, so that each point on the paper corresponds to a point on the plate directly below it. Now take the paper and crumple it into a small ball, and throw the small paper ball into the plate.

Then, according to Brouwer’s fixed point theorem, no matter how the small paper ball is kneaded, and no matter where it falls on the bottom of the plate, we can be sure that there is at least one point on the small paper ball, which is exactly located at the original position of the plate. This point corresponds to the point directly above it. Although we cannot tell where such a point is.

Similarly, the point corresponding to Ω2 on the original paper must be located directly above Ω2, and the orthographic projection of this part of the paper ball on the bottom of the disk is the area Ω3, and Ω3<Ω2, and so on, and so on, can be repeated to get A series of areas Ω1, Ω2, Ω3,..., which are smaller than each other, one of these areas is contained in the other, forming a layer of enclosing circles that are as small as one layer. Therefore, it must be reduced to "a point" (or "a small area") in the end, then the position of this point (or a point on a small area) on the paper ball must be just above this point.

After Brouwer’s fixed point theorem came out, it aroused great interest of scientists from all over the world. They did a lot of work on it and obtained many wonderful applications.

In 1799, the German mathematician Gauss proved that the nth degree algebraic equation

At least one root. This is known as the Fundamental Theorem of Algebra.

Since the root of the equation f(x)=0 cannot go beyond a circle with a large radius in the complex number plane, and the function φ(x) is obviously continuous, so Brouwer’s fixed point theorem is used in this large circle , knowing that there exists at least one point x such that

That is, the equation f(x)=0 has at least one root. Look! A theorem that plays a huge role in algebra has been proved so easily.

However, scientists seem to be unsatisfied with the fixed point theory, because this theory only tells the existence of the fixed point, but does not say where the fixed point is. This problem plagued them for 50 years, until the late 1960s, when things turned around.

In 1967, Professor Scarfe of Yale University in the United States made a major breakthrough in changing the fixed point from unknown to known. He proposed an algorithm for approaching fixed points with a finite point sequence, and the application of fixed points has achieved a series of outstanding results.

Interestingly, Scarfe himself, who made such a great contribution to the fixed point theory, was a scholar specializing in economics. Mathematical theories have made Scarfe and his colleagues even more powerful in the field of economics, and have achieved fruitful results.

Author: Zhang Yuannan Zhang Chang
Part of the picture comes from the Internet and the copyright belongs to the original author
Editor: Zhang Runxin

Good news for lonely patients!Japanese scientists have developed a small robot that can relieve pain and anxiety by wearing it – yqqlm

The first mass-produced battery pack of the Juwan G11 project rolled off the production line, focusing on XFC ultra-fast batteries