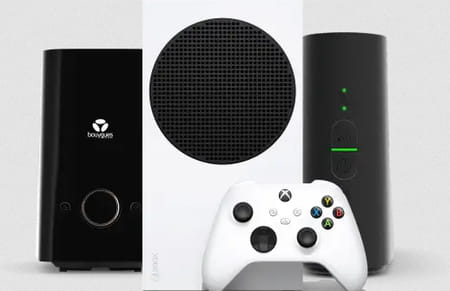 Fiber is indeed an essential element for gamers because it offers very high speeds to load games quickly, very low latency to be responsive during online gaming, and a very stable connection – it would be a shame to be kicked out of the game after winning. is at hand. In addition, Bouygues Telecom’s new offering, created in collaboration with Microsoft, may be of interest to more than one: Bbox Gaming! This allows prospective customers of the operator to subscribe to the Bbox Ultym Gaming offer (which provides access to Wi-Fi 6E, 180 channels, as well as Salto and Disney+ for 6 months for 50.99 euros per month) or Bbox Must Gaming (which provides access to Wi-Fi 6 and 180 channels for €41.99 per month) with a 24-month commitment and get a discounted price on an Xbox Series S console (via a promo code to be entered on the La Vitrine High Tech website) and a subscription on Xbox Game Pass Ultimate, giving you access to hundreds of quality games at unbeatable prices starting at €1!

Bbox’s gaming offering lets you experience the “better Wi-Fi” with Bouygues Telecom’s new Wi-Fi 6E or Wi-Fi 6 modems, as well as the Xbox Series S, the latest generation all-digital version. a console from Microsoft that offers reduced load times, smooth and dynamic rendering (up to 120 fps), 4K HDR compatibility, and other technologies such as ray tracing and 3D spatial audio. In short, a beautiful toy stuffed with the latest technology. And with Xbox Game Pass included in the Bbox Gaming formula, there’s no need to buy games that aren’t cheap anyway, as subscribers have direct access to a catalog of around a hundred titles, whether or not they’re small independent creations. or essentials like Forza Horizon 5, Halo Infinite, Microsoft Flight Simulator, Sea of ​​Thieves, or Gears 5.

Moreover, this is not just an Xbox Game Pass formula – there are three of them, and the most expensive one is Xbox Game Pass Ultimate. It allows you to access pay-to-play multiplayer and offers special benefits, including in-game content and partner offers, as well as access to the entire catalog on different devices: game console, computer, as well as smartphone, tablet or TV! Thus, the player can start the game on a stationary device at home and continue it on a mobile device, on a train or bus. The auxiliary device is practically used only to display game images, which are calculated remotely, by specialized servers and sent in real time – hence the interest in exemplary fiber connection. In short, it’s a bit like a Netflix video game.

Typically, Xbox Game Pass Ultimate costs €12.99 per month, while an Xbox Series S console costs around €300. With the Bbox Gaming offer, a subscriber can get a console and take advantage of a 3-month subscription for just €1, saving €338, or a 24-month subscription for €159, saving €611! Once your subscription expires, you’ll need to subscribe to Xbox Game Pass directly on the Microsoft platform at regular prices. An offer that deserves consideration in order to clearly understand whether it is worth it – or rather the cost – depending on its use, taking into account the period of validity and the price of the fiber.